There are some truly fucking fucked up people in the world aren’t there. And if you feel offended by my language then stop reading now probably because I might get more fucking colourful on account of those fuckers who do stuff like shoot lions and other fucking fucked up stuff way more offensive than saying fuck a lot.

I’m grumpy and may or may not be a few days shy of my (fucking) period. Just putting it out there in case you hadn’t noticed. I’m better than I was yesterday though, yesterday there was lost shit all over the joint. Sometimes it’s good to lose some shit, othertimes it just makes a mess. Anyway…

I don’t pay as much attention to the news as I used to, on account of not having enough time between parenting and being a submerging writer and rockstar (you’re emerging until you’re 40 and hormonal and then you’re more than likely submerging, but I’m ok with that, I’ll still send my random bubbles to the surface in case one of them flies instead of fucking popping). But this week I couldn’t help but get a whiff of certain bits of very fucking stinky news.

Adam Goodes not playing this weekend.

I don’t give a flying fuck who wins the AFL and whether the Swans are worse off without Adam Goodes this weekend, but I really really care that it appears people have booed him out of his footy boots. I care that he must be feeling really shit and that racism has a lot to do with it. I fucking hate racism, and I don’t buy the argument that the relentless boo’ing of Adam Goodes has nothing to do with racism. Here’s why I think there’s boo’ing happening:

1) The boo’ing has become a thing. Everyone is talking about it and there is a great mass of mindless fuckwits in the crowd who think it’s funny to throw fuel on the fire. They have safety in their fuckwit numbers and I don’t think they even know why they’re boo’ing anymore other than they “think it’s (guffaw) fuckin’ funny”. Until this all dies down, they will continue their fucking idiot bully bogan behavior. So let’s hurry up with the condemnation of these boo’ing bastards and then ignore the fuck out of them.

2) People feel intimidated by Goodsey’s war dance. Oh you poor darlings, are you tewwified by a great big scary imaginary spear? Oh give me a fucking break. Yes it’s an aggressive gesture, but isn’t the whole tackling someone to the ground or jumping on their shoulders to get a ball thing kind of aggressive? Isn’t the whole football, roaring crowd, fist pumping, buggered hammy culture kind of intimidating? Throw a bit of indigenous pride in there and fans suddenly get all “gasp, how dare he”. And while we’re on aggression (and because I bloody well can dig up the past don’t mess with me and my hormones), wasn’t there are fair bit of aggression going on when us vanilla-ites arrived here and fucked everything up for our indigenous people? Personally, I feel a surge of pride on behalf of all Aborigines when I watch Goodsey (and later Lewis Jetta) do the dance, and let’s be honest, a healthy dose of arousal. Do I support the whole Swans team doing the war dance? Fucking oath I do, what a fantastic bit of spectatory that would be. 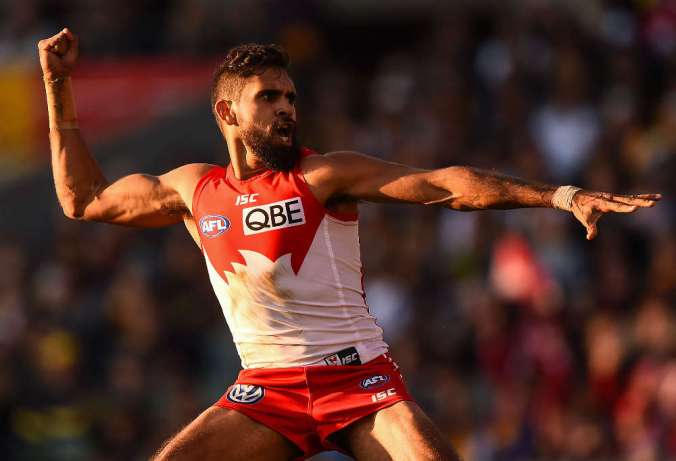 And if people say that the footy ground isn’t an appropriate place for making such statements, well I say, of course it fucking is. Any public platform that can flag deep seated social wrongs, condemn unkindness and promote tolerance and kindness in the mainstream is entirely appropriate. You know how theatre is used to hold a mirror up to society, make people think? Well think of this as theatre for fuckwits who don’t go to the theatre.

3) Adam Goodes stood up to racism. When a 13 year old girl called Adam Goodes an ‘ape’, he pointed her out to security and had her evicted from the MCG in front of the sporting nation and later (via the media) to the rest of us. People came down on Goodes like a tonne of shit for targeting and ‘victimising’ a ‘powerless girl’. The fact that this girl is only 13 and allegedly didn’t know that what she’d said was racist only supports the view that racism is a deep seated problem in Australia. If he’d ignored her and walked away saying nothing, would he been seen as a ‘good bloke?’ How many other indigenous people walk away from racism for fear of being turned into the bad guy? To say Goodes was ‘victimising’ this girl is complete fucking bullshit. Immediately after the incident, in his statement to the media, Goodes declared,

“It’s not her fault…I don’t blame her..it’s what she hears, the environment she’s grown up in…she would have no idea how (this) makes anyone feel…the person that needs the most support now is the little girl…people need to get around her…”

Every racist-driven incident needs a stand, especially if we get to see war dances and beautiful Nicky-Winmar-esque torsos.

I know everyone knows how awful this is. I don’t really need to add my two cents worth but I’m hormonal and this story has me in tears. I mean FUCK. Cecil, for those who don’t know, was a famous Zimbabwean lion who was head of a pride of about 22 lions. He was and major attraction of a the Hwange National Park and was being tracked by Oxford University as part of a large study involving African Lions.

He was also being tracked – unbeknownst to him clearly – by Walter Knobhead Palmer, who had apparently paid $50,000 to shoot a lion. He wounded Cecil with an arrow and two days later shot him with a rifle, skinned and beheaded him. He has since uttered regret at shooting such a well loved Lion. Of fuck off Walter, don’t shoot ANY lion. African Lions are endangered you FUCKHEAD. You just regret the bad press your’re getting. 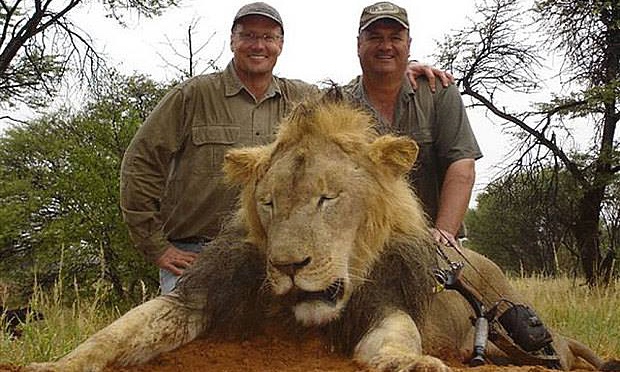 You know what else Walter Palmer? It is probable that Cecil’s 12 cubs will be killed by the incoming head of pride lion, in order to create his own bloodlines. That’s the way of African Lions. You’ve likely killed a whole family of lions you STINKING EXCUSE for a HUMAN. Pour your tooth-pulling fortunes into the safeguarding of this amazing species and right your wrongs and maybe karma will forgive you.

Here’s another idea – while the world makes a fuss about Cecil, Zimbabwe itself is in economic meltdown – there are water shortages, no electricity and no jobs. Do something to help them Walter, with your perfect fucking sneery smile. If you’re really sorry, bloody well show it.

Here’s some GOOD NEWS, from the Good News Network… A man who had his son’s organs donated years ago has received the same gift from a recipient’s son. How’s that for Karma?

You know your organs and tissues Walter?  Register to donate the shit out of them.

In more good news, I had a clear pap smear, which gets that scrapey shit out of the way for another two years hallelujah. If you’re overdue go and book that fucker now. NOW. Love your cervix.

Sorry if there are hormones-passion driver errors, I have no time for editing as I have to get to yoga.