WHEN THE MOON WAS LATE (A story by Bess, Lucie and Meg, Illustrated by Bess and Lucie)

One night, a long, long time ago, the moon didn’t rise.

She was full fit to burst and bright enough to light every way, but still she didn’t rise.

The masked owls shuffled in their nests, waiting to fly by the moon, but even by nine she was nowhere to be seen.

The wombats peeked from their holes and grumpily snuffled in the dark earth, but still she didn’t rise.

The bats blinked into the sable sky. Upside down stars blinked back in bewilderment. But still the moon didn’t rise.

The joeys scrabbled impatiently in their mother’s pouches, longing to unfurl. But still, the moon didn’t rise.

The echidna sadly scratched his way over rocks and wondered where in the dark his family could be.

The possums twitched their noses impatiently. They could smell sweet-eating roses but had no light by which to find them.

The moon, meanwhile, had spent the day busily baking blueberry pie. She had all good intentions to eat a little each morning when she returned home from her light work. But it had smelled so delicious that she couldn’t resist just a tiny try; then another smallish try and another largish slice, until the pie was all eaten up and she was fuller than ever a moon could be.

Having been so busy with pie making and now so full from pie tasting, the moon felt very, very sleepy. “A quick snooze is in order”, she thought to herself. “It is not yet five”. And so, with a quick glance at the sun still well above the horizon, she closed her eyes and slept.

Two hours later, as the sun slipped out of sight of the world and the sky blushed pink to grey, the moon was still deeply sleeping, dreaming blueberry dreams and snoring ever so softly.

By half past nine, the hungry, restless animals lost their patience. They raised their heads to the horizon and called their night animal calls into the shadowless dark. The owls hoo-hooted, the wombats squeaked, the bats screeched, the joeys whined, the echidna sneezed and crashed through scrub and the possums rasped and squealed.

The moon’s blueberry dreams were rudely disrupted by a cacophony of night noise. Her eyes sprung open to black night and instantly she knew that sleep had taken her well beyond dusk. In a panic she bounced from her clouds and sprang into the sky as quickly as her fullness would allow.

She was puffing by the time she rose above the horizon enough to see her friends the night animals gazing up at her in relief. Or was it shock?

“Holey Moley” and “What in the world?” The night animals would have called if they could. Instead they

silently stared, their little mouths agape. Even the possums were still, though the roses were glowing in blue moonlight.

Yes, the swollen, giant bauble that was the rising moon was neither silver nor gold but a gleaming, perfect blue. 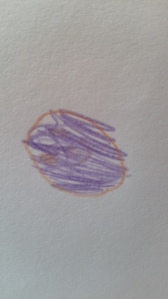 The owls flew through the blue beams in delight, the wombats drank thankfully from a shimmering pond, the bats swooped and played in the glittering trees, the joeys stretched and tasted the strange blue air and the echidnas nuzzled together in the phosphorescent night.

The possums thanked the blue moon as they nibbled the sweet petals of a teal-tinted rose.