How did it all start?

Well the simmering Israel/Palestine conflict over Gaza has been on the boil for an incredibly long time and has its roots in ancient history (get your full background here). This deeply entrenched animosity is partly why a solution is so very hard to find.

Very basically: Palestine was, in times BC, named Judea and was home to an embattled ethnic group who practiced a particular religion called Judaism. Judea was conquered by Romans and then in early AD, by Muslim Arabs from the Islamic Empire. The people of Judea were forced to scatter.

Fast forward to the 20th century after World War Two, when the UN felt the pressure to assist the Jewish diaspora and gave a chunk of Palestine to them. They named their land Israel and considered it to be their traditional home after centuries of persecution and dispossession.

The Palestinians have disputed and fought – often violently – this decision ever since. They were forced to leave their homes and settle in the Egyptian controlled Gaza Strip and the Jordan controlled West Bank.

So what is it about Gaza? And who is Hamas?

About 1.5 million Palestinians live in Gaza. The Israelis believe firmly that it is rightfully theirs and have tried to move the Palestinians out by force without success. In 2005, Hamas were elected by the Palestinians to lead Gaza. For its violent acts and pledges to restore their homeland and remove the Israelis, Hamas has been described as a terrorist organisation.

Consequently, Israel has held Gaza under blockade, tightly controlling its borders, its coastline and who comes and goes. Life for Palestinians in Gaza has been very hard – they can’t easily get in and out, employment is low and standard of living lower still. Hamas has over the years, regularly sent rockets out into Israel and in return, Israel has conducted organised offensives.

Why did things get nasty this year? 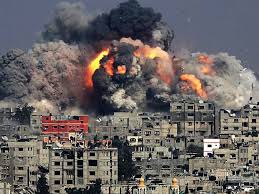 Well this was another organised offensive by Israeli defence forces, called Operation Protective Edge, which was kicked off in response to a series of unfortunate events:

On 17 July, the operation was expanded to a ground invasion with the stated aim of destroying Gaza’s tunnel system, which is a maze of interconnected tunnels built by Hamas to bypass tight Israel-imposed restrictions and get food, supplies, KFC (yep, complete with seven secret herbs and spices) weapons and people in and out.

What followed was a lot of firing rockets at each other, blowing the shit out of stuff, people dying, other people ignoring ceasefires and the world getting all frenzied about who should or shouldn’t be doing what.

Then on 26th August, 2014, an open ended ceasefire was ordered and the rockets stopped.

Is that really the end? For the moment maybe, but this ground is hollowed and and shaky and one day soon I predict it will all start to collapse again.

Statistics? Yep I have them.

PLEASE NOTE – These figures have been sourced from reports from the UN High Comissioner for Human Rights and given the proximity of the events and the difficulties of collating stats in a war zone, could be subject to change. Thank you very much.

I’m not going to answer that. I don’t see any winners here.

Man, if there’s a cure for this one it’s going to take some scientist to find it, some sort of savant emeritus professor of peace. I don’t know who is right or wrong, I am too far removed to make that call. All I can say is, please stop killing people, no matter what your stance or cause or passion or desperate situation, killing is never ok. Ok?

No more bad news for now. I’m spent. I’m going to cap off the week with some Good news. Stay tuned. x

My friend and co-blogger Emily, who lives i tel Aviv and knows a thing or two about this topic, has kindly given me these points/ammendments to consider, PLEASE READ THEM, she knows about this stuff far better than me…Thanks Emily.

1.The historical summary didn’t mention that there has always been a Jewish presence in the area and that increased immigration started in the late 1800s by Jews and Arabs both. Jews didn’t start to consider Israel their homeland after the state was created in 1948 but have considered it to be their home for 4000 years. It is in their daily prayers repeated since ancient times.

2. After the state of Israel was created, the surrounding Arab countries immediately declared war (Eygpt, Syria, Iraq, Jordan and Lebanon), and during this conflict not only were over 700 000 Arabs displaced and forced out, but 1 000 000 Jews were forcibly removed, or fled the surrounding Arab countries for Israel. There was mass upheaval on both sides, which is terrible, but a consequence of war.

3. Israel has not tried to take over or remove people from Gaza, they have always considered Gaza part of the occupied territories, and in fact Israel tried to hand Gaza back to the Egyptians in 1979 and this was refused.

4. Hamas was not declared a terrorist organization in 2005 because they wanted to provide homelands for their people. They were declared terrorists after they formed a religious based group in the 1980’s and perpetrated (by their own admission) 97 suicide bombs over 14 years that blew hundreds of Israeli men women and children into tiny pieces in the city streets and on buses.

5. Non Hamas factions did not start sending rockets into Israel as a result of the crack down in the West Bank. Hamas intensified their rocket fire that is for sure, but rockets are constantly sent into southern Israel on a daily basis and have been done for YEARS. In fact daily rocket fire is such a fact of life for communities in the south that it doesn’t even make the national news, let alone international news.

6. The tunnels are principally for carrying out terrorist operations in Israel and were built with Israeli and EU donated concrete for housing, while Palestinian child labour was used to build them.

7. Casualties reported by the UN, are directly provided by the Palestinian Health Authority – i.e Hamas. See this article for further explanation.
http://www.forbes.com/…/the-media-intifada-bad-math…/