I Nearly Shat on Science Week

I do on occasions strive for the cheap laughs, but I assure you, this wasn’t one of them. This post depicts true, bowel-loosening mortification.

A while ago I agreed to talk at our local primary school’s science expo, an evening put together in honour of National Science Week, in which local agriculture would be featured along with local produce whipped up and served by the school’s parents and friends.

Given that I am a school parent, as well as a friend of those putting the evening together, I felt I should step up. I knew the real farmers of the family would rather lick a cow’s butt than stand up and speak in front of an audience. So I thought, “I can talk about How Milk is Made, of course I can. Go me, good famer’s wife I am.”

I thought about how best to keep children entertained and engaged for ten minutes while talking about something potentially boring and came up with the GENIUS idea to dress up as a dairy cow and deliver the talk, in the first person, as Meggie Moo the dairy cow.

Based on that premise, I prepared a story that would deliver the essential milk making facts in an elementary fashion. I left out anything too complicated or long-winded, kept it light and simple. Heaven forbid I get too, I don’t know, sciencey. I took some photos around the farm and collected some props to illustrate bits of the talk. And, I found the perfect cow suit, complete with ears and a pink rubber udder. I even enhanced it with a felt-penned brand on the buttocks and a large button sewn into an ear for the ear tag.

I was ready and, as usual for me, looking forward to taking the stage as Meggie Moo.

The evening started well (apart from the woman who approached my dairy display to complain about our bulls bellowing). There were plenty of punters, lots of kids running about, a scrumptious dinner prepared by school mums who are exceptionally great in the kitchen. In fact, three of them are chefs. I offered to help and was given the task of cutting up butter. I did it wrong, then tried to correct it and it went all melty. I finished the job and scurried out thinking, “I’m much better off out in here talking to the crowd, yes that’s where my skills lie.”

After dinner, a call was made for the children to assemble down in the library where a movie was being put on for them if they preferred. Apparently last year the children disrupted the speakers a bit. 90% of the children (including my blessedly traitorous children) departed the room in favour of Dreamworks. That left about 100 grown ups (most of them there to learn more about local agriculture, some of them scientists already), a smattering of kids and me, with my cow suit folded up in a bag.

I started to feel cold.

When the first speaker began his power point presentation on the agronomy behind potato farming, I started to sweat. A proper, cold sweat – you know, when your eyebrows start prickling. I shuffled around with my speech notes, desperately trying to think of ways to brainy-up my talk. I ditched the name Meggie Moo along with a long practiced ‘Mooooooo’ and the idea that I might do a little bit of bovine interpretive dance. I took out a few very silly kid jokes (if I ate ‘chocolate I’m sure I would make chocolate milk’, shit like that) and with five minutes to go decided I could either just go for it or run for the hills.

I snuck into the kitchen to put on the cow suit and seek some support from the chefs. They laughed and got out their cameras.

I thought about feigning a faint (always wanted to faint) or pretending to have a panic attack (threatening anyway) but I was summonsed for stage time. It was at this point that I felt I might do a little cow pat in my knickers.

By the time I go to the microphone and projector screen (on which was a huge picture of a cow’s bottom – I thought that would be a funny start for the kids), I was shaking so much I couldn’t hold onto my notes. I had to put them on a low table from where I couldn’t see the type without bending down.

The scroll button on the computer wouldn’t work so the bottom shot was stuck on the screen until it was fixed by technical support. Awkwardly, I showed the crowd my own bottom onto which I had felt penned my brand number.

I somehow got through the rest of it. I’m not sure how much sense I made, it’s all a little blurry. I remember a few highlights:

And oh, the gorgeous woman on the right hand side a few rows back, the one with the lovely face who smiled encouragingly at me all the way through. I don’t know her at all but I wish I did so I could thank her. She got me through. I think most of the talk was delivered to her.

Afterward I jokingly told a school teacher that I was available for class room talks. He said, “Oh”.

And later I overheard my boy say to his twin sister, “I looked through the door at mum speaking. She was dressed as a cow. Then I went and played soccer.”

Thanks must go to my friends who told me later that it was ‘great’ when it wasn’t, to the kitchen girls who kept me from galloping into the night, and to the lovely organiser who knows all about Ag Science in theory and practice and insisted I enhanced the evening when really I offered nothing in the way of science, other than the science of stupid.

Apologies to those organisers and the school for not thinking the whole thing through properly; and to the other speakers who clearly knew their shit, were proper scientists and spoke passionately about important things like Peak Phosphorous, crop disease prevention and the importance of healthy soil. Sorry too, to the young scientists who spoke with such enthusiasm about their theses. One of them is researching the human brain. I ought to have asked him if anything might be done for mine.

Sorry Science, you are important and wise and thank goodness for you.

Next time I will wear jeans and help put out chairs. 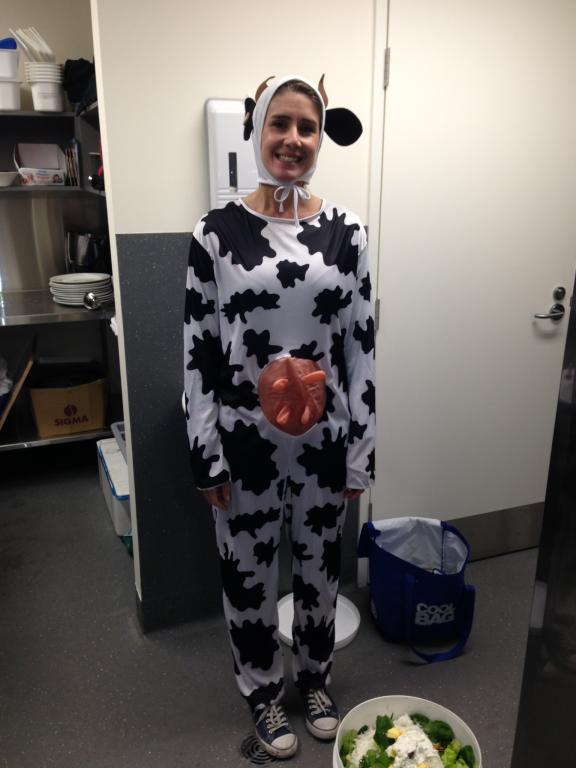 Thanks for the photo Eloise Emmett, chef extraordinaire and blogger at http://eloiseemmett.wordpress.com/