Tonight my children asked me to tell them a story instead of reading one. So I just started off without thinking, just  to see where the story went and where we might all end up.

“Once upon a time, there was a little girl called Meg who lived on a beautiful farm by the river with her Mum and her Dad and her sister.”

“Is that you-Meg Mum?” Asked someone. 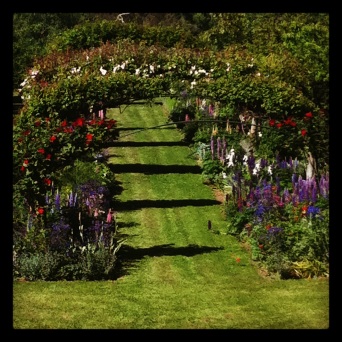 “Yes. It’s me-then-Meg, not me-now-Meg. So every day Meg and her sister Emily and their friends played wonderful games in the garden. It was a huge garden, with enormous trees and fruit and secret bits to hide in. Sometimes they played “Lost Little Girls” which was when they pretended they were lost in a wilderness and no one could find them and they would starve and die a tragic death (they would compete to see who did the best dead impression). Other times they would play Schools, in which the older children got to boss the little ones around and get cross with them a lot. Meg, being a little one, didn’t care much for that game. Then there was “cripples”, which is when they hobble about with sticks and the croquet mallets as crutches and pretend they’d been terribly injured in an accident.

“Did you play normal games mum, like hide and seek?”

“Yes, we played hide and seek and chasings and 52 bunker.”

“I’ll teach you one day. Other times, Meg and Emily would make potions out of bits of dirt and petals and leaves and water from the river. Or salads out of cabbage from the veggie garden, buttercups and berries. They would deliver the salads to their mother who would thank them and say, “Mmm, delicious.

“And there were times when their Dad would join them in the garden and put one long arm in the air and make a claw with his huge hand, which meant it was time for Monsters. The monster would hide behind trees and growl or sometimes go up the tree and make crow noises and drop acorns and green peaches and Emily and Meg would have to run hysterically away in case the monster gave chase. He was very fast and could trip you to the ground and tickle you almost to death.

“Once Meg got cross with everyone and packed a tiny suitcase with food and knickers. She put on her duffle coat and wrote a note with chalk that said, “I am running away to Hollywood”. She got as far as the bottom of the garden, where she ate her food by the river, got bored and wandered home again. No one had noticed she was gone. She still hasn’t gone to Hollywood.”

At this point my children were laughing about me getting cross and running away, and I had tears in my eyes. Not because I never got to Hollywood but because that little girl has gone away, never to return and because they are all such precious memories. I was all wist and nostalgia and throat lump and had to excuse myself, citing dinner and waaay past bedtime etc , leaving the children to their very best dead impressions.

I’ve stopped feeling so mushy and sobsy, but I still feel a longing for the daggy old eighties. I love that decade. So much more colourful and determined than any decade since. The days were longer, the moments more occupied and the summers went on forever. And the fashion, while kind of hideous to look out now, had such confidence in itself.

I wish for that garden and for me to think of nothing but what to do next in it, what tragic imagining we could inject into our tragedy free lives. I wish for no computer games (oh wait, there was Donkey Kong, Emily was brilliant at it), no more than 3 telly stations (Sons and Daughters was my guilty secret) and movies saved for cinema outings, with cartoons at the start and intermission.

I know I’m sounding like a sentimental, “Golden days” old woman, but that’s what I am. And those days really were golden. Platinum days, with diamonds. And if I feel sad for their loss, then what a lucky person I am to have had them and their tickle monster and a Mum who loved our salads despite the loss of her cabbages.

But one day I’ll be ancient and sentimental about today, and the days ahead as me-now-Meg and her young family. So I’d better get on, recall the rules of 52 bunker, mine the diamonds out of today and give them to my children.