Catch Up On: NORTH KOREA

And the Biggest Cockhead of the decade award goes to: KIM JONG UN of North Korea. I’d put my money on the fact that this arsehole has a very small penis. If he wasn’t born into his position as leader of the last country under (what he claims to be) communist rule, I’d imagine he’d be the bitterly dysfunctional teen plotting massacres between wanks in his college dorm.

He’s the loose cannon threatening the world with long-range nuclear missiles and releasing stories of questionable integrity to scare the bejesus out of his people and America. He, like the family dynasty before him, keep secret much of what they have done to their country, but there is little doubt that the place is a hive of brainwashing, paranoia, lies, human rights abuses and economic decay.

I have had a small look at the official website of North Korea and other associated propaganda, which paints a frankly creepy picture of love and harmony while the place actually seems to be one big, terrifying joke. Here’s just one example: Kim Jong Un’s father and predecessor Kim Jong-Il had schools teach their students that his birth triggered the appearance of masses of rainbows, and that he doesn’t poo. No wonder he was so full of shit.

History Please (and make it snappy)

Korea was a colony of Japan from 1910 to 1945, when Japan was defeated in World War 2. The peninsula of Korea was split into 2 countries along the 38th parallel by US administration, with the South becoming a republic (Republic of Korea) and the North establishing communist rule (The Democratic People’s Republic of Korea). Tensions were immediate as both countries wished to reunify Korea under their own Government.

In June 1950, North Korea invaded the South and the Korean War began.  Notably, the UN (mainly the US) entered the conflict on the South Korean side, while China and the USSR fought alongside North Korea. Fighting continued until an armistice was signed in 1953.

The 38th Parallel became a demilitarized zone with soldiers patrolling each side. Millions of families are still separated and the tension between the two countries simmers.

But the main history shaper for North Korea has been the family of fuckwits in charge. It’s “Great Leader”, Kim Il-sung, controlled political affairs for almost half a century and was succeeded by his son and now, grandson.

The Tower of Juche: Concrete evidence of small penis syndrome

After the Korean War, Kim Il-sung imposed his personal philosophy, “Juche” on his people. Juche directs that the people of Korea must be self-reliant, that they are the masters of the country’s development. It was extended between 1950 and 1970 into a set of principles that basically justifies any fucked up old decision the rulers make. A notable Juche application is,

“…moulding people ideologically as communists and mobilizing them to constructive action”

Il-Sung emphasized the importance of the people learning their history and developing a strong sense of patriotism, which in his crazed brain meant telling them (in basic Megoracle terms) that the whole world is evil and plotting against them and that everyone but North Korea are a bunch of deadshits not to be trusted. Baby North Koreans are raised on a diet of propaganda that depicts North Korea as a racially pure nation surrounded by US-led enemies threatening to invade the country and enslave the people.

Kim Il-sung died in 1994, but as a result of his creation of the principles that underlie daily North Korean living, the post of president has been assigned “eternally” to him. His son, Kim Jong-Il – another sociopathic lunatic – took over.

South Korea has thrived as a republic, its economy boosted by industry, while North Korea’s economy has steadily declined. South Korea held up an olive branch in the form of aid and while North Korea readily accepted the aid they essentially told the south to shove their olive branch by building up their military force and waving nuclear weapons about willy nilly like they are nerf guns. As a  result, South Korea and the US withdrew their food aid and the people began to starve.

South Korea made further moves toward peace, with their president, Kim Dae-jung‘s visiting the North in 2000. Seoul’s “sunshine policy” towards the North aimed to encourage change through dialogue and food aid and resulted in a relative ‘thaw’ of tensions between the two nations.

How are things in North Korea these days?

It is reported by aid agencies that up to 2 million people have died since the mid 90’s, succumbing to food shortages caused by natural disasters and financial mismanagement. Without foreign aid, millions more would have died.

The totalitarian regime has also been accused of gross human rights abuses. Reports of torture, public executions, slave labour, infantacide and forced abortions have emerged via defectors. It is estimated that there are up to 200,000 political prisoners in North Korea.

North Korea prides itself one of the world’s largest armies and militarism is present and normal in everyday life. Daily work is set into a military framework and citizens are given better chances at life if they serve in the military. But it is reported that standards of training, discipline and equipment in the force are sub-standard.

Hatred and fear for Americans is still instilled in every North Korean from an early age. They are plied with images depicting evil Americans every day.

This is contrasted with the saccharin, happy-family image of the Kim dynasty.

How Real is the Nuclear Threat?

I may have small penis, but I have bloody great missile

Well, while it’s hard to know what to believe amongst the furfey-ridden dialogue coming from North Korea,  there is strong evidence that we should pay attention:

Should we be worried?

Well there is opinion that the nuclear huff and puffery is all a lot of of posturing and empty threats; that images released by North Korea indicating the legitimacy of nuclear threat are fabricated. Earlier this year, the North Korean media agency released photos of their naval activity, which appeared to be photoshopped to increase the number of warships. Most analysts agree that North Korea doesn’t have the ability to carry out their missile threats on the US. 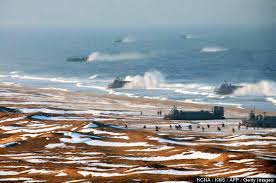 There have been warlike ‘movements’ between the US and North Korea. South Korea tells of activity at South Korean missile sites, while the US has sent jet fighters to hang out in Seoul as a warning to Pyongyang.

Yesterday an ex CIA chief advised President Obama not to underestimate Jong-un and to seriously consider a ‘surgical’ strike over the current ongoing diplomatic negotiations to show he means business when it comes to long-range missile threats.

I’m not sure if that’s necessary, but I do think that this Kim Jong-un is a madman running a rogue-show, and that to ignore him and treat him like the spoilt brat man-child he is will only inflame him and steel his resolve. This is a bloke who thinks he can have anything he wants, and maybe he wants world domination.

And if we’re not getting overly worried about nuclear threats, then I think we need to be worried about the people of North Korea. What terrible secrets is this country hiding beyond the nasty bits and pieces leaked out by defectors? Foreign media is not allowed into the country, nor are tourists unless they join groups guided to all the right, shiny-happy bits. There are food shortages, exacerbated by sanctions and pig headed rulers spending resources on the military. People are starving, others are incarcerated for speaking out or being South Korean. Millions are still separated from their families.

As a mother with experience in bad mother moments and a fascination with pushy dance-mums, I worry for the little children being choreographed into mindless empties designed to show the world what a showpiece of democracy their country is.

‘we love our father Kim Jong-un, he is our god’ 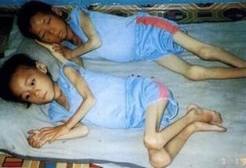 A last bit of (alleged) craziness from the lovely Kims