Recently I had a prolonged ‘I’ve forgotten something’ feeling. Being a spontaneous shopper as opposed to a meal-plan-shopping-list kind of person, the feeling was not unfamiliar. I even have my own name for it – the ‘forgeeling’. But it usually passes once I get in the door and notice the dog looking a bit hungry or the tea bag jar a bit empty.

This time, the forgeeling had been hitting me on and off for a few weeks, at times so powerfully I had to shut the children away, sit down and think hard over a cup of tea (because the tea bag jar was full so that wasn’t it). But I found that the ‘something’ I’d forgotten slipped further away the more I thought about it, like a dream you try to remember or a star you look at too directly, and I had to sigh, release the children and give up, leaving the forgeeling to continue its uncomfortable grumble. It was Most Unsettling.

But then, in a public toilet, it came to me; yes I found enlightenment in a smelly concrete stall teeming with unknown germy horrors.

It was soccer day and I was already slightly miffed that another Saturday sleep in was ruined by a bit of muddly ball kicking, even more so because it was raining. I’d stayed in bed stroking my phone in the hope it would bleep out a lovely cancelled message. It didn’t and so with barely enough time to even bother my uggboots, I fed, dressed and shouted at three children until we’d managed to get on the road for the fifty minute drive to soccer.

The soccer ground (henceforth known as Arctic Park) is right on the waterfront and had a wind whipping across it so cold it would cut your legs off. The children all flapped about and jiggled, umbrellas turned into inside-out safety concerns, the rain turned to sleet, my nose ran and people laughed at my beanie. Ten minutes before the end of the game, the umpire called time and we all squelched back to our cars. I could have stayed in bed.

By the time we’d had a hot chocolate and a fight over marshmallows, the whole family needed the loo. We relocated to said public loos and while I waited what seemed an eternity for my 3 year old to be ready for a bottom wipe, I thought I’d have a little facebook escape. The very first post on my wall was from an old school friend on holiday in Hawaii. It was a photo of a glittering beach with the caption, “View from my balcony.”

I reflected on the fact that this particular friend often posts about parties and cocktails and holidays, as well as the fact that she is drop dead gorgeous with wonderful clothes and probably hadn’t wiped a bottom other than her own lovely one or had to get out of bed for sleety soccer. My 3 year old schreeched at me, I clicked off facebook and thought, ‘Oh well, she doesn’t have kids, she has fun.” And that’s when it hit me – along with the smell of my child’s poos – the source of the forgeeling. I’d forgotten how to be anything other than a mother.

I’d forgotten that tropical beaches were going to feature prominently in my life. Once, because I was cold, I moved to New Caledonia and worked at Club Med. These days it’s a major operation to get the family to the park.

There are other dreams that I’d forgotten, the ones along the “what do you want to be when you grow up” line that never involved bottom wiping or scrubbing crayon off chairs. I always thought I’d live in a foreign country and immerse myself in the culture, emerging all glowy and exotic and fluent in something impressive. I thought I would help build a village school in a developing country with a lovely climate, or immerse myself in indigenous culture. Now it seems an effort to re-learn the names of all the -agon shapes, build a duplo robot or get ’round all the explainy bits in the museum.

My dream of singing onstage – one I’ve had since I fell in love with Les Mis in the West End when I was 13 – now seems ancient, creaky and frankly sad. I can’t bring myself to watch the new film version on account of getting too emotionally envious of Anne Hathaway. 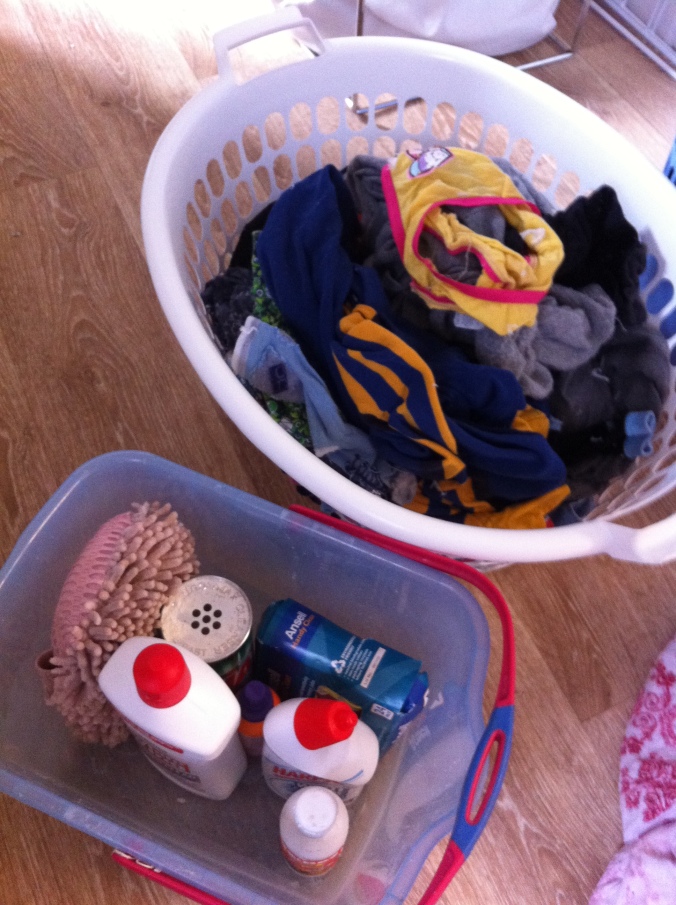 A trained eye will note that I washed a tissue in this load. I blame winter and colds.

I’ve forgotten how to go about life without worrying that something should be done. I’ll be filling in forms and thinking about lunches, catching up with friends and planning a grocery list, reading the paper and feeling guilty about the washing. And when I’m writing – which I do a lot – it is constantly overshadowed by the fact that it is a pastime that brings in no money, despite my best efforts. This very article is one rejected by a women’s magazine (I’m sorry to be posting my rejected material – do you mind?) and the fact that I’m spending time editing and posting it makes me feel anxious that I’m not getting the wood in or something equally pointed toward running an efficient household.

If someone asks, “What’s been happening?” I’ll mostly answer, “Oh you know, children stuff, nothing much.” Because firstly I’m not sure that anyone wants to hear about the groundhoggy packing of lunches, home reading and new ways not to cook. But it’s mostly because if I am doing something outside the gated community called the motherhood, I’m disinclined to go into it because I’m all ashamed about indulging in time wasting occupations. Secretly studying musical theatre and practicing, “I Dreamed A Dream” into the mirror just doesn’t fit the ‘productive’ mould and lies more in the ‘mental’ category.

I am always (to use a phrase coined by psychologist Clayton Barbeau), ‘Shoulding Myself’ or caught in the act of what another psychologist, Albert Ellis, calls ‘Musterbation’. Musterbation among mothers is probably a natural and productive thing. It comes with the package, all heartstrung together with that incredible rush of love that clobbers us right in the gut at frequent and various times. Perhaps without the shoulding and the love, we would all leave our babies in on of those Russian baby hatches or flush them down the toilet, because the work is relentless, exhausting and emotional. It can also be searingly boring, thankless and downright smelly. But with almost constant musterbation, goodness it’s hard to live in the moment, or remember what you wanted to be when you grew up.

I still pursue my interests. I read, I write, I play guitar, I watch films, I garden, I see theatre and friends; but my writing is mostly inspired by the children and my status as a mother, the friends I see regularly are the ones emeshed with school or extra-curricular activities and the theatre is rated PG. I garden because I see it as the one contribution to the household chores that I actually enjoy and the rest I do when all the work is done (or hidden away). Even then it’s slightly rushed, too brief for real satisfaction and tainted by the nasty whiff of should all over me.

And I’ve forgotten how to be spontaneous, I get panicky if I’m home too late or away too long and as I result I am missing out on lovely things happening about town. Perhaps, it occurs to me, some of the the forgeeling is actually FOMO (Fear Of Missing Out) in disguise. But I’m uncomfortable out of a routine that sees three small humans eat, sleep, laugh and learn enough to make then functional, reasonable beings. I once used to chuck a few bean bags and some grogs in a van and take off with friends to anyplace. Now the thought of camping without portacots, hot water and fresh milk gives me horrors.

There’s a sense that the forgeeling is about what’s happening in the wider world too, that there are Big Things going on and making history that are infinitely more interesting than mine: “I cleaned the ‘fridge today and I hid some spinach in the lasagne.” I attend to current events as much as I can but again the musterbating intervenes.

None of this matters too much. I am conscious that when I do listen to the news or read the papers, there are people and whole countries who are suffering far more than a bit of boredom and stuck-in-rutness and who have lost far more than a bit of identity and a few opportunities. Some have lost their children and that, far beyond any concerns about my forgotten dreams, my sometimes breathless need for freedom, my knickers needing two pegs for the clothesline and the fact that the electrician saw me squeezing milk from my boob, is the greatest fear of all. Not having my children would leave in a hole so great I would likely fall in it.

Yesterday I saw a report on ‘Absent mothers’, women who have children but decide it’s all too much and leave their husbands in custody of their children, regularly skyping their love and affection. At first, to be honest, I felt a wave of understanding. One of them said that she understands she is a terrible mother but if she were a man she’d be a wonderful non-custodial father which is kind of a fair point. But then I watched these women talk of how they spent their days – painting, tai chi, writing journals, general self-loving – and I felt sick. As much as I’d love a few days as a skype mum at a writing retreat, I bet my life I’d have no motivation, no inspiration and no desire to push myself. And I’d miss those little buggers so much I’d be a raving, guilt-ridden loonie with more issues that an eenex box. There’s no time like stolen time away from toilet cleaning in which to shine; plus there’s nothing quite like having a shiny toilet, happy children and all jobs done in which to indulge in a well deserved break.

I can, after all, find stories and fun in my children. I can search the growing baggage of domesticity for poetry. Who knows, I might find a few crumpled old dreams still in decent nick. I might yet sing on a stage, even if it’s a homemade one in the living room. I might come to relish the forgeeling because the forgotten thing is usually something lovely.

And when I find some time, I can maybe start thinking about what I want to be when they grow up.