Brush Up On: TALKING WEATHER WITH SURFERS

I am in regular contact with surfers. No I am not a surfer. Dude. I just live at the gateway to a bit of a surf break. One day recently when I was walking the dog along the beach, I was told by a pretty surfie chick in skinny jeans and ugg boots that our beach break (known to locals as Eagle’s Reef or North Marion) is FULLY SICK. That particular day there were twenty or so surfers on the reef and I thought it looked plain scary. If I’d been cast adrift out there I would have been fully sick too. All over the surf board.

Anyway, I should know more about when to predict upcoming fully sickness and when there might be mad surfers trying to get quick access through our private property to the waves. Then I could tell the children not to ride their bikes on the drive way. But I know squat. And this from a former weather girl. I know, shameful.

Here’s one good reason to brain up on weather patterns.

It helps to know that Huey, the Oz god of weather (worshipped and berated by farmers and surfers alike) works the surf using pressure. Pressure turns into wind, then swell, then waves. To flesh this out a bit;

A combination of low and high pressure systems (measured in hectopascals on a synoptic chart and abbreviated to ‘highs’ and ‘lows’) creates constant air movement as air in a low rises and needs replacing by air from a high pressure area. This movement is commonly known as wind. The greater the difference between lows and highs, the stronger the winds. On a synoptic chart, lines that are close together indicate strong winds.

Low pressure systems are generally the swell forming kind. Wind generates swell, which turns into waves as it approaches the shore.

3 wind factors determine the size of the swell – the wind strength in a low pressure storm, the duration of the storm and the distance over which the wind blows (the fetch). Combine strong winds, a big ol’ storm and a long fetch and step aside grommets, the big fellas are comin’.

Swell comes in two forms – ground swell and wind swell. Wind swell is formed by short fetch winds near or at the time of observation. It can create messy, choppy waves and is generally uncool. Long fetch winds generate ground swell which can travel up to thousands of kilometres from their origin. Ground swell creates nice clean, regular waves with lulls between sets.

Waves vary in height and character according to many factors including seabed topography, swell size, water depth, wind strength 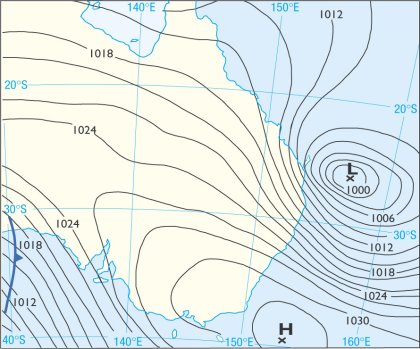 This 1967 long-fetch storm generated huge waves that washed away the beaches of the Gold Coast.

and land aspect. Plunging waves (as opposed to spillers) with a progressive break (as opposed to a wave whose entire length breaks simultaneously) are the highest and most thrilling to surf – a board can be maneuvered on the wave front just ahead of the break.

Other factors that will see surfers getting all horned up (excited) include:

Crikey, no wonder surfers are always darting off at the most inappropriate times (like when their wives are in the early stages of labour or from the scene of a car accident) – ideal conditions appear hard to come by. This explains why surfing is more of a lifestyle than a hobby.

Rightio then, I feel like a bit of a wicked dude now. Also, I may no longer think of a bag of brightly coloured sweets when I hear the word ‘hecticpascals’.

Any surfie peeps out there – feel free to critique, add, subtract. I am no expert, and am starting to feel slightly, if not fully sick at all the talk of waves.