Pondering On: AFTER THE FIRE

So I won’t go on about it anymore after this okay. It could be that everybody’s had about enough of bush fire talk and would like to just move on into normal territory thank you very much. And I don’t wan’t to wallow in it either. I’m more than ready for normal. But I do think it’s important to dwell a bit, to remember those who can’t move on, not yet awhile. And to remember how things used to look too. I mean one day we’ll go, “Hey, remember there was a bakery there once?”…”Yeah, it burned down. Good pies. And the old hall had this great photo of the queen looking like she was about to burst out laughing, beautiful baltic lining and a brand new kitchen. You don’t see baltic like that anymore.”

I don’t even actually know if it was baltic pine that lining. But I do know it was a lovely hall. Such an old country hall feel to it that I fear you can’t build into a new place. And it’s going to be like that for so many people. They can rebuild but they can’t whip up Gran-Gran’s Wedgwood or little Johnny’s first painting or that smell you smell when you know you’re home. You can’t build things that you’ve collected over years or spent hours making or keep because your first love gave it to you.

And that’s just the things on the inside. Outside, the territory is far from normal. It’s changed and dark and unfamiliar and perhaps will demand a new kind of normal from now on. And that will take a some adjusting to. Many people in my neighbourhood are looking out their windows for the place they chose to live and finding it gone. Many people have no windows at all; their landscapes are changed completely and forever. Some may never come back.

The school landscape is pretty much gone. Any trees that were spared from the fire have been cut down for fear of large, weakened limbs and small people underneath. A hefty layer of topsoil has been scraped off the entire school site in case there’s leftover asbestos fibres. Even the rubble is gone – the burned school logo, the piles of half familiar bricks and twisted iron, the skeletons of the roses at the entrance. The kinder play garden – meticulously planned, funds tirelessly raised, labour and materials donated, lovingly tended and ceremoniously opened a month before the fires has been pushed away by machines in minutes. And with the soil and rubble went whole histories that will never be remembered because those that could are themselves all but forgotten. It’s sad, really sad. And I will wallow around in that for a while before I move on (and at times in the midst of the moving on).

My husband went to that school. His impossibly large feet walked those hallways when they were small. He won ‘The Gingerbread Man” book at that school, for first place in a running race. Two of my children go there and the third I take for regular cooking and reading  sessions. Some one had just given the kinder class a gorgeous wooden kitchen. It had rubbery plastic food – bread and a nasty looking piece of plastic processed meat. There won’t be any plastic processed meat in the new school. Why do I feel sad about that?

The cleaners (as excellent as they are) will be glad to be rid of the loos. No amount of cleaning can rid school loos of that smell. You know the one.

Anyway, I really have had a short term involvement with the school. My sister in law has been the drama teacher there for 17 years. Her wedding dress was in the costume closet in the drama room. She has more to cry for than processed meat. So do all the other teachers, staff, students and past students for whom the school has been central to everything. So I won’t wallow anymore.

It’s wonderful that we’re getting a new one. When there was speculation about the rebuild and talk of being relocated to Sorell etc, I felt sad mostly for the town of Dunalley. Many, many residents would have upped and left – burnt home or no – had the school been abandoned. The town would have shrunk. Many of my friends would have had to move away. So thank goodness; thank the goodness in people to make this happen so quickly.

No more wallowing, just a few observations about a catastrophic fire experience…

1) Nothing will prepare you – even if you watched the fire on its devastating path – for seeing the aftermath of a large bushfire. The sight will be as overwhelming as the smell.

2) The smell gets stronger when it rains.

3) You will look twice at unusual cloud formations, thinking they are smoke.

4) There will be an overwhelming surge of generosity. People everywhere will want to do something or give something. There will be a mass of fundraising events and volunteer drives. People will phone asking who they can give $30,000 to and stuff. Seriously. It’s huge.

6) There will be those people who have their house left standing amidst a whole street burned. These people will not necessarily feel lucky. They are living in a changed landscape, their friends and neighbours might not be around, everything will smell of smoke for a very long time, they have probably lost their gardens, they may be traumatised and it’s likely they feel guilty that somehow their house survived. They need attention too. And probably clothes that don’t smell of smoke.

7) Showers are just the best thing. So is your own bed.

8) If you choose to stay and defend and get through it with a house intact, you’re a hero but there’s every chance you will say never, ever again.

9) Small pieces of speculation regarding damage (“the pub’s probably gone”) will quickly turn into fact (“the pub’s gone”) as it passes from mouth to mouth. Try not to believe everything you hear until the smoke clears and the dust settles, literally.

10) Sleep will not happen very much; you’ll be surprised to find you don’t need it.

11) Children, no matter how normal and carefree you try to keep things, will pick up on stuff. Never once did I let on to my children that I feared for the safety of their dad but when he finally turned up (blackenly reduced to teeth and eyeballs), my 3 year old said, “Dad are you alive? Why you not dead?”

And some advice (because clearly I’m an expert now, although these experiences are not all mine)…

1) If you’re grumpy about being evacuated with the women and children, don’t take it out on your husband. You might not see him for a while, or be able to contact him. You might fear for his life and wish your parting gesture hadn’t been the bird.

2) If you evacuate and you’re on the pill, don’t forget to take the packet with you. For one thing you can skip the sugar pills and skip a very badly timed period and for another, when you see your husband again after thinking you might not and he’s a little bit of a hero, you will want to jump his bones and not worry about having a little fire baby.

3) If a passing boat offers to deliver some food, it’s okay to ask for lemonade for your pimms – there are some instances when it can be considered an essential item (and you deserve it).

4) When you do get to leave your evacuee camp, scrub up as best you can even if there’s no running water and your haven’t showered for 6 days. The media will be everywhere back home and your crusty mug complete with dread locks could end up on the telly. Try saving at least one clean shirt for this occasion.

5) Try not to be drinking pimms in your bikini when the ABC cruise past to film evacuees. It’s probably appropriate to look a little bit traumatised.

6) Always keep a coupla slabs of beer at home, they could come in handy to put out bits of burning house.

7) Always keep petrol in your car in case of disaster. You don’t want to run out soon after you’ve evacuated with all your valuables and the dog.

8) Build your house near a church, it’s more likely it will be spared.

9) If you have phone signal, call or text your relatives near and far, they could be watching the smoke or the telly and both can soon bring on fear for your safety. With the radio issuing evacuation warnings for your area every few minutes, fear can build and not knowing can turn it into panic.

10) Don’t bother trying to read a glossy magazine to distract yourself from the fire raging before you. Anything remotely frivolous will be rendered pointless and dumb. Personally I found Posie Graham-Evans’ book, “The Island House” a good option. It was escapism but based on historical fact featuring people in far worse situations than I. 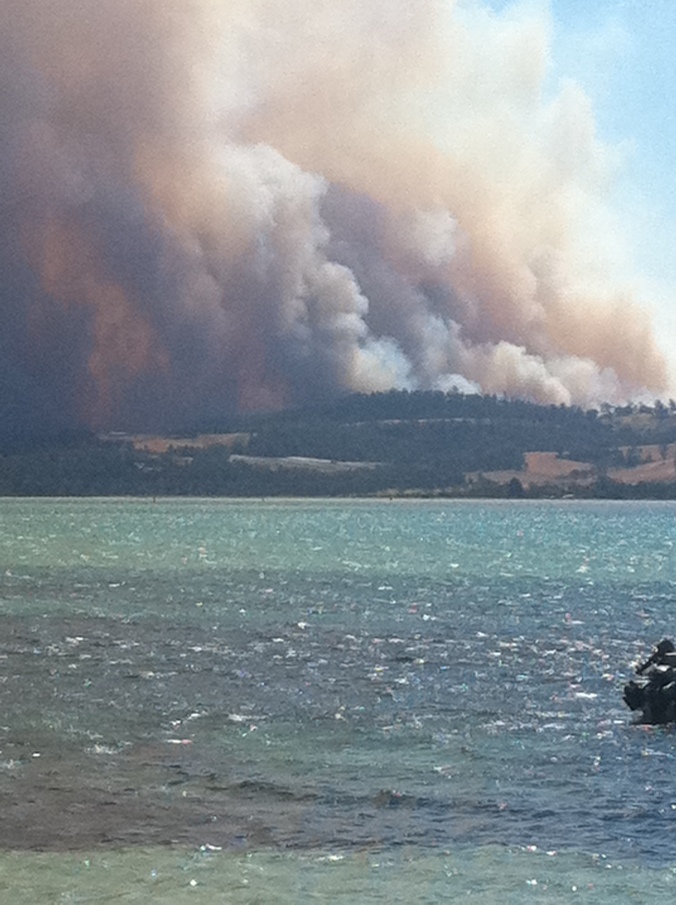 And lastly, (this is becoming a bad habit), I’ve written a song for our school, because it was a dear old thing. And because it’s been saved and no dumb old fire can beat it (put our School Association Chair, Elizabeth Knox up against any number of fearsome foe and my money’s on her every time – in her evacuee status at the Dunalley pub she began her crusade to save the school and didn’t stop when the rebuild was announced. She will see to it we have a school that will attract enrollment requests from Sandy Bay. She deserves a medal that one, she really does).

So here it is, recorded in my laundry (with thanks to those whose photos I have stolen and to those faces I have used without permission – sorry about that, please let me know if you’d like your image removed and I will do so without hesitation)…