Brush Up On: ISLAM

Realised during Sydney’s Muslim riots that I actually don’t know very much about Islam – and I should because the religion is so central to much of our news, not to mention the (according to the 2011 census), 476,300 Australians who identify as Muslim. To be honest, it wasn’t that long ago that I learnt that Islam is the religion whilst Muslims are its adherents. I just kind of thought Islam and Muslim were two religions (I know shut up I’m working on my brain okay, I’ve come a long way since I thought that Muslim was a kind of cloth you wrap babies in).

Firstly the trigger for my brush up: The Muslim Riots in Sydney…

Well this was a social media managed protest in response to an anti-Islam film, “Innocence of Muslims”. It started relatively peacefully on the morning of Saturday 15th September 2012 and escalated into violence when the protesters tried to enter the US Embassy and police used capsicum spray to push them back. More extreme protesters (some identified as a- Qa’ida supporters) carried placards that read, “Behead all those who insult the prophet”, Shariah will dominate the world” and “Obama, Obama, we love Osama”.

photo courtesy of The Daily Telegraph

The 2o year old alleged organiser of the protests was arrested on 21st September. It is claimed that he used social networking sites and a mobile phone to whip a bunch of people into a frenzy. 9 protesters were arrested and police continue to analyse images and footage of the protests to identify further inciters of violence.

What is it about the film that is so offensive?

Well here it is – tell me what you think. In my ignorant view the mot offensive thing about it is the shithouse acting. But I am not Muslim. For a start, Muslims deem any depiction of Muhammad as offensive. This film depicts plays Muhammad as a ‘gluttonous bastard’ with no undies (he’s not too shabby to look at but that’s beside the point). It is grossly offensive to Muslims in its blatant disrespect for their beliefs. It should be offensive to everyone else because it is an irresponsible and inflammatory misuse of film making that has caused the death of 4 Americans in Libya, including US ambassador Chris Stevens.

But the film aside, there is talk that it was a catalyst for a disgruntled Muslim community the world over; that there is serious unrest over Western Society and democracy simmering away under the surface awaiting a reason to overflow. Professor Salman Sayyid (Director of the International Centre for Muslim and Non-Muslim Understanding) said in a recent interview that the film and other examples of blasphemy against Islam (such as Salman Rushdie’s book, Satanic Verses*) have met with such outrage because…

“…right now there’s a situation in which Muslims do not have a political structure that can express their opinions. They’re not strong enough to basically stop these kinds of insults—what they perceive as insults—so they can’t educate people normally through channels of how to behave, in a way. But they’re not too weak so they have to ignore them. So I think they’re caught in this kind of tussle right now; that these little things are partly a way of trying to create a space…is saying, well you know what, this really is not something that we’re happy with and we don’t need to take it.”

Who made the film?

Oh who cares, some dickhead, that’s not really the issue is it? But I actually still want to know because I’m imagining a cowardly-cocky arsehole who is swaggering about saying, “Me scared? Never dude”, then wetting his pants over the daily news and cowering under his bed.

So the film’s director has been identified (by the Wall St Journal) as Sam Bacile, an Israeli-American real estate developer (see I knew he’d be cocky). He claimed that his film was “a political effort to call attention to the hypocrisies of Islam” and that “Islam is a cancer”. This has more recently been refuted when Sam Bacile has been found not to exist, which means the name is most likely a pseudonym for someone actually called I.M. Trouble (made that bit up). Other sources reveal his real name to be Nakoula Basseley Nakoula. I’d call myself Sam too.

The cast and crew of the (allegedly) $5million film say they were misled, that the script was changed dramatically in post production (using some really classy dubbing) to include the words ‘Muhammad’, ‘Islam’ and ‘Muslim’. In the original the script the Muhammed character was called George (you couldn’t make this shit up). The film’s crew are claiming suitable mortification.

It is a monotheistic Abrahamic religion. WTF?? Don’t panic, it just means that Muslims worship one God and either 1) believe that they are all descended of Abraham 0r 2) recognise a spiritual tradition with him (that fella in the bible – Christianity is also an Abrahamic faith). 54% of the world’s population follows an Abrahamic religion.

What is the Qur’an? 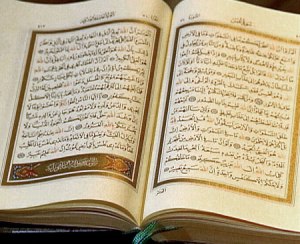 (or the Koran) It is an ‘eternal and heavenly’ book – the “unaltered and final revelation of God” – as opposed to previous messages and revelations that have been corrupted and changed over time.

Muhammad is said to be the greatest of all the prophets. He was the “last and final prophet that God sent to humanity”. He explained, interpreted and lived the teachings of Islam and is thought to be responsible for bringing the most people to the pure belief of one God than any other prophet (other prophets include Adam, Noah, Abraham, Moses and Jesus).

Allah is the Muslim word for ‘God’.

What is Sharia Law?

It is the moral code and religious law of Islam, or the ‘infallible law of God’. It incorporates such things as crime, politics, economics, health and sex.

What are the 5 Pillars of Islam?

1) Belief in Allah as the only God

2) Belief in the Angels of God (such as Gabriel)

4) Belief in the day of judgment and Resurrection at the end of time, when all will be raised from the dead, judged according to their faith and life and sent either to the gardens of paradise or the fires of hell.

5) Belief that God is responsible for everything – good and evil because everything happens at the will of God. Meantime everyone must take responsibility for his/her own actions.

The 5 Pillars of Worship are the basic acts involved in being a practicing Muslim. Each pillar is seen as a gateway to deeper understanding and spirituality: 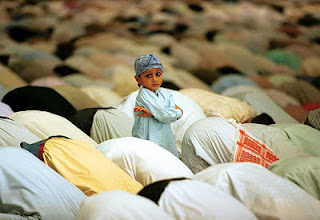 So I got cramp ok.

3) Zakat – is an annual, obligatory contribution to charity at 2.5% of all liquid assets.

4) Saum – is the fasting from dawn to dusk each day during the ninth month (Ramadan). No food, drink or nookie during daylight while  the spirit renews itself.

5) Hajj – the pilgrimage to Mecca (if physically and financially able) during the 12th Muslim month. It retraces the steps of Abraham and includes offering an animal sacrifice and shaving heads.

Sometimes referred to as the 6th Pillar of Islam (worship), Jihad is mentioned numerous times in the Qu’ran and is described as ‘striving in the way of God’ or ‘the struggle to sustain the Islamic faith’. It has in recent history been linked to the motivation behind acts of terror, but in everyday practice, it is the struggle to keep the faith and maintain a healthy Muslim society.

What are the various Islamic sects?

Sunni Muslims make up around 85% of all Muslims. Sunni translates to ‘tradition’ and Sunnis see themselves as following the traditions of Muhammad. Movements to transform Islam in the last century have been mostly Sunni movements.

Shi’ite Muslims make up around 15% of the Muslim population. They are ‘the party of Ali’ – believing that the Muslim community should be headed by a descendant of Muhammad.

Sufis are Islamic mystics. They go beyond the usual requirements of the religion to grow closer to God through meditation and spiritual growth. Sufi orders are similar to Christian monastic orders (monks). Most Sufis are Sunni Muslims.

Baha’is and Ahmadiyyas are both offshoots of Sunni and Shi-ite Islam. Bahai’s consider themselves the newest of the large religions but acknowledge their Shi’ite Islam roots. Most other Muslims deny the legitimacy of either group as Muslim and often declare the offshoots corrupted. Baha’is boasts a strong world-wide following and emphasises the fact that, “Humanity is understood to be in a process of collective evolution, and the need of the present time is for the gradual establishment of peace, justice and unity on a global scale.” Sounds good to me.

Druze, Alevis and Alawis are small Islamic spin offs with unorthodox beliefs and practices. They no long see themselves as Muslim nor are they recognised by other Muslims.

What is Al Quaeda?

It is a global militant Islamist organisation founded by Osama Bin Laden in about 1989. Its origins have been traced back to the Soviet War in Afghanistan. It operates as a scary multinational network that includes a stateless army and a radical Sunni Muslim movement calling for global Jihad and a strict adherence to Sharia law. It has been blacklisted by the UN, NATO and the EU as a terrorist organisation after numerous attacks on people they consider Kafirs (unbelievers, infidels).

What does Islamist mean?

Islamists hold that Islam is as much a political movement as a religion. It is increasingly seen at odds with democracy. Islamist is defined in the dictionary as: “An Islamic revivalist movement, often characterized by moral conservatism, literalism, and the attempt to implement Islamic values in all spheres of life”.

Ooh I’ll be treading carefully here – and I know nothing really so please know that these are just my thoughts, not by any means gospel ok…

I think it’s very easy to overlook all that is good (peace-loving, charitable, self-aware) about Islam when the extreme Muslims are (and the resultant media is) so loud and the messages of al Qaeda so devastating . I think that the evolution of Christianity from its violent, dark age days of persecution and forced belief has been greatly suppressed in the Islamic world – perhaps due to a lack of democracy in their country of origin. The branches of religion that have perhaps softened and become more liberal have according to many Muslims strayed from ‘true Sharia law’ have been cut off altogether and relabeled non-Muslim faiths.

I read somewhere a few weeks ago (and for the life of me I can’t find the source but I think it was The Australian), that the Muslim world has been lacking the widely published, well known and much loved thinkers or the Western world – those people who have shaped modern day beliefs and behaviours away from extreme ones. Perhaps we should have chucked my old friend Jung into the Middle East years ago?

And lastly, my apologies to anyone if is offended by the article, I welcome further enlightenment, corrections and comments.

*Years ago I tried to read The Satanic Verses but it was so far beyond me – all I remember is a lot of confusing names and people floating through the sky. Any further insight would be appreciated.