Well the Brits are probably tired of this smeary old news story in the glowy light of their golden Olympics (that sounds bitter, it’s not I promise), but I have to say that this is one I’m enjoying. ‘Media’ and ‘phone hacking’ and ‘scandal’ ought to belong together in a sentence; it’s about time something rumpled the dicky ways of the tabloid media. And this has been more than a rumple. News International (the newspaper publishing division of Rupert Murdoch’s News Corporation) and the rest of the media world have had to take a good hard look at themselves and their information gathering techniques. But while most of the world are tuning out, I’m just learning how it all started…

and Andy Coulson. These two have received particular attention because they have close alliances with Very Important Big Wigs – Brooks was the chief executive of News International and close bud of Rupert himself, while Coulson was the PM (David Cameron’s) media adviser.  The rest are other various NOTW editors, reporters and assistants. They will all appear before the court next month. This brings the total number of people charged with phone hacking and associated crimes to around 70.

And news just in (well overnight), the Anglican Church has sold its News Corp shares as a protest to Rupert Murdoch’s handling on the whole phone hacking affair. Even God’s cross.

What did they do exactly?

They hacked into the phones of various newsmakers, hijacking bits of private voicemail to inform their stories. Victims include British Royalty, the relatives of soldiers killed in action, relatives of victims of the London bombings, celebrities (Sienna Miller, Elle McPherson), victims of crime and police.

It has been revealed that in 2002, NOTW (under Rebekah Brooks as editor) hired private investigators to hack into the voicemail of murdered schoolgirl Milly Dowler (she was abducted from her home town in March 2002, her body was found 6 months later and her deeply evil, fucked in the head murderer charged in 2008). The hacking was performed while Milly was still missing. This is about the earliest reported case of phone hacking (so far).

I keep hearing Daffy Duck saying “DETHPICABLE”, which is a pretty mild reaction to a series of truly despicable, low acts. Where are their scruples?

What are scruples? (I sort of know but find I don’t)

I imagine a little bag of knobbly things children collect and swap. But they are “feelings of doubt or hesitation with regard to the morality or propriety of a course of action” (thanks Merriam-Webster) . What a shame they can’t be popped into baggies and slipped into the pockets of immoral dickheads. Anyway…

How did it all come out?

Well in 2005 (under Andy Coulson), NOTW published an article that told of Prince William borrowing an editing suite from ITV royal correspondent Tom Bradby. I know, who cares? Well turns out that Wills and Bradby were the only two people who knew about the arrangement, so they were suitably suss. Add to that another improbable leak about the prince seeing a knee surgeon, and the two decided their voice mails were being accessed. The allegations went to the Royalty Protection Command (within Scotland Yard) for investigation.  The NOTW offices were searched and it was found that the phone account of Prince William’s aide, Jamie Lowther-Pinkerton (of course that’s his name) had indeed been compromised. The royal reporter, Clive Goodman and the private investigator he payed (Glenn Mulcaire) were charged with phone hacking.  In 2007 Goodman and Mulcaire pleaded guilty and were sentenced to 4 and 6 months imprisonment respectively. On the same day, Andy Coulson resigned as NOTW editor, further investigations began, the can opened and the wormies came crawling out.

How did it turn into an international ethics scandal?

New allegations of phone hacking were being made and new investigations undertaken by newspapers, privately engaged lawyers and police. There was a fair bit of evidence for the claim that phone hacking went beyond one rogue reporter.

In response, Scotland Yard opened a new investigation into News International. As a result, more journalists were arrested for phone hacking . It also came to light that NOTW had employed a wholly corrupt idiot private detective named Jonathan Reese, even after he had been imprisoned for 7 years for perverting the course of justice.

A few months into the investigation, News International admitted its breaches of privacy, apologised and compensated 8 victims who had claimed damages (including Sienna Miller who received 100,000 pounds plus legal costs thank you kindly).

In July 2011, The Guardian (another London newspaper) blew the whistle on the Milly Dowler affair and that was pretty much the death knell for grubby old News of the World. It closed in 2011. Many lucrative advertisers pulled their business, allegations continued and the public were annoyed. Ding-dong. 200 people lost their jobs. It’s website has a single page that  says, “The world’s greatest newspaper 1843 – 2011, Thank you and goodbye”. This makes me wonder how many turns of the grave the NOTW editors of old have done over the last decade.

What of Rupert and News International?

Amid the investigation, it was also alleged that Rupert Murdoch had appealed to then PM Gordon Brown to help avert the investigation. News International dismissed this as rubbish. Brown refused to comment.

And the Milly Dowler case lead to accusatory looks toward Rebekah Brooks (who denied knowledge of the hacking in 2002 when she was editor) and serious consideration for the blocking of a planned takeover by News Corp of British Sky Broadcasting (BSkyB), a telephone, internet company. Murdoch withdrew his bid on the company just hours before the Parliament were due to debate the issue.

Further revelations were unearthed – of soldiers’ families and bombing victim’s phones being hacked, followed by more and more high profile victims being identified. Then came damning evidence of links between the police, the government and Rebekah Brooks (i.e. Brook’s husband out horse riding with the PM on a horse borrowed from Scotland Yard – what a pretty picture)  and whoopsie daisy, we have a scandal verging on the notoriety of Watergate.

A number of senior employees and executives, including Rebekah Brooks (although Brooks continues to deny knowledge or involvement with phone hacking) have resigned their positions with News International.

Murdoch issued a couple of full page apologies, signed by him in many British Newspapers in July 2011. 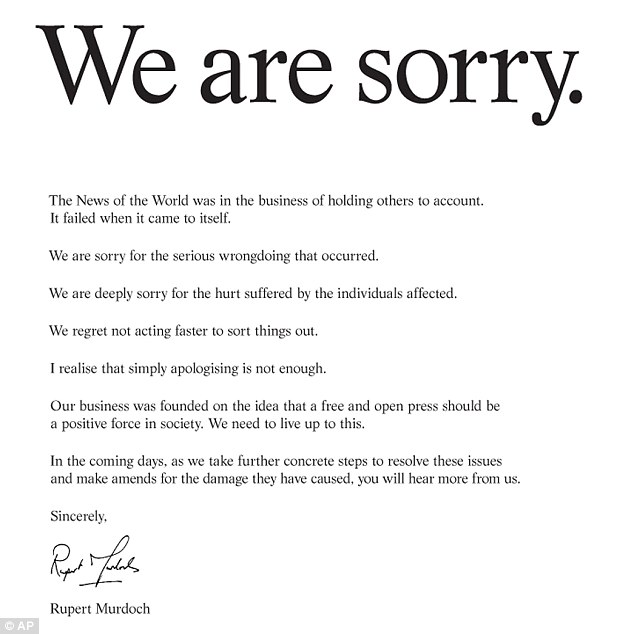 What is Watergate (I should know but I don’t)?

It was the US scandal that brought down Richard Nixon in the 70s. Nixon covered up the fact that his election team organised a break in of the Democratic headquarters (Watergate building) to steal information to assist their campaign. When found out, Nixon was forced to resign.

What’s this about police involvement?

Metropolitan Police have been criticised for not earlier reporting their knowledge of phone hacking practices. It has been found that in some instances potential victims were warned by police that they could be a phone hacking target and should change their access codes, yet nothing was made public.

Sir Paul Stevenson, Britain’s most senior police officer and the Metropolitan Police Commissioner, along with his assistant commissioner resigned in July 2011 due to connections with the phone hacking scandal.

Under investigation is the allegation that police were bribed by reporters from newspapers including NOTW and The Sun (under the editorship of Rebekah Brooks, oh Becs, you’re in trouble dude).

Are other Media outlets guilty?

Well it turns out that a reporter from The Guardian, who have are all “the NOTW is dethpicable” is under caution for using a private investigator to spice up her stories.

There are reports of frequent use of phone hacking within the Daily Mirror as well, including the retrieval of a message from Paul McCartney to Heather Mills in which he sang to her and asked for her back (what a waste of emotion and talent that was Paul).

The Sun (which is now pressing a Sunday edition to replace NOTW), has been implicated, as has The Sunday Times. Both are under investigation.

What is the Levensen Inquiry? 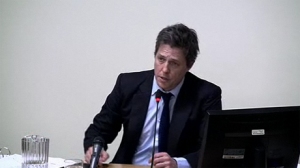 Hugh Grant told the Levenson inquiry that news of his relationship with Jemima could only have been hacked from his phone.

It is an ongoing public inquiry instigated by the Cameron Government into the whole affair. It is chaired by Lord Justice Levenson, who sounds like a very important personage (he must be, I called him a personage).

The inquiry is to focus on “the culture, practices and ethics of the press, including contacts between the press and politicians and the press and the police”, as well as the extent of the unlawful conduct of News International and any police corruption rumblings. 46 victims of media intrusions including celebs, sportspeople and politicians have been selected as ‘core particpants’.

And what do I think? (in case you’re still reading)

Well I think there’s a load more to this than I will ever know and more to this than will ever come to light, but I don’t really care. The field of news gathering – particularly tabloid – can definitely be a stinky place, and the relationships between polticians, media big wigs and police can also be on the nairse, but don’t we all know that? Yes of course any dealings that dictate unreasonable public opinion, tell blatant lies and bring distress to innocent people should be brought to justice, but I sort of feel that this whole affair has gone beyond that. Now there are small-ish and unremarkable revelations of media-political friendships or police-media friendships or horse-media friendships or whatever and suddenly everyone is in bed together and the results are bound to be skanky. Can’t anyone be mates anymore? Of course Lord Leveson is being linked to the Murdoch family now. Come on, stop making scandals out of nothing. I don’t want to talk about it anymore. Now that I’m better informed, I am, like the British public, tired of it.

One thing I should add though – is it not in part the appetite of we as consumers for trashy codswallop that fuel the stinky fires? If we buy gossip mags, we are paying the wages of dodgy people and securing their futures.

I don’t mean to get all superior and pious about this because I like a good gossip as much as the next person, but perhaps we should be 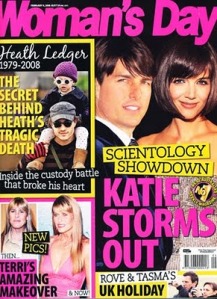 thinking more about what we read and what sort of  crappy journalism we encourage by our reading habits. Get yer bums off the tabloid seats is what I’m saying. Women’s Weekly is ok, so is Marie Claire and Vogue maybe, and of course the wildly popular Megoracle, but move away from the New Idea by crikey. And anything that has the word ‘famous’, ‘truth’, ‘uncensored’,  ‘confidential’ or ‘celebrity’ in its title. Or has ‘scoop’ on the cover.  Unless it’s a magazine about ice cream.

Gather ye scruples peoples and get choosy about what you pick up next time you pass a magazine stand or need a long sit on the lav.