Catch up on: GREECE’s ECONOMIC CRISIS

I read that a kindergaten teacher in Greece recently found this note with one of her students: “I will not return to collect Anna. I do not have any money and I can’t bring her up. Sorry. Her mother.” Bejesus; here I was worrying about losing an earring. I think the excesses and indulgences of the silly season have caused me to lose some of my perspective on things, not to mention some liver function and brain cells. Brain rebooting took a few steps back I’m afraid. But this article jolted (and guilted) me back to work.

It seems the austerity measures imposed upon Greece since it found itself half way down the gurgler financially have sent Greek citizens into desperate situations. But wait on, I know shit all about economics beyond the old supply and demand curve and while I’m hearing snippets most days about a worsening crisis in Europe, I feel the need for some context. Rightio then…

**First my disclaimer – I am WAAAAY out of my depth here, as well as my comfort zone, and while I have researched and bent my brain as best I can , please do not treat the following as gospel, there may well be errors and things lost in translation.**

What’s all this about the Greek Economy? 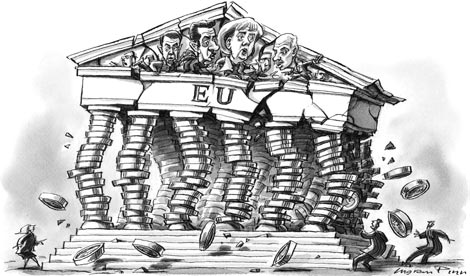 Well essentially Greece has reached a point where their sovereign debt has reached horrifying levels – up to 160% of gross domestic product (GDP). Their GDP (total monetary value of all finished goods and services produced within a country’s borders within a specific time period, usually one year) for 2010 was $US304.87 Billion. My maths is terrible but wowsers, 160% of 304.87 billion = deep, deep shit. A country is deemed to be in economic buggery when debt levels near 100% of GDP; Greece has hovered around the 100% mark since 1993.

Who do they owe this money to? Well quite a few organisations, but big debtors include Europe’s banks, who are waiting on $US50-60 billion, and now (since a bit of a 110 billion euro bailout in 2010), the other Eurozone countries and the International Monetary Fund (IMF).

So how did they get in to this hole? Greece has a long history of living beyond its means – they have invested heavily in public services and are very generous with public servant wages and welfare, particularly toward the elderly. They have trouble raising revenue from taxes as theirs is largely a cash economy, rife with tax avoidance (amounting to $US20 billion per year) and deficient in tax collection infrastructure.

Their entry to the Euro-Zone in 2000 was based on fiddled figures, essentially telling the European Council that they were in good enough shape to join but in fact weren’t at all. My limited understanding of this is that debts were hidden and the currency exchanged, leaving Greece getting all yee-ha with their new money and strong backers and going on a good old spending spree. Then when the Global Financial Crisis hit, there was no hiding their debt anymore, and further over-generous government spending in the form of stimulus packages, lead to deeper sovereign debt.

So I could pretend to know what you’re on about but what is sovereign debt? It is public debt, or debt which is money owed by a nation’s government. Governments issue bonds (debt securities or formal contracts to repay borrowed money with interest)  The current debt crisis – in Greece and other parts of Europe – is a result of sovereign debt.

So Greece have been bailed out once before – what’s with that? Well in May 2010, the International Monetary Fund (IMF) and the rest of the Eurozone countries tried to avert panic and defaulted loan actions by handing Greece 110 billion Euro (sorry can’t find the Euro symbol button) in bail-out loans. In order to secure the moola though, Greece had to agree to strict austerity measures to bring their deficit under control. This means a major roll-back (stole that expression from Woolies) on their spending, to be monitored by the European Commission, Europoean Central Bank and the IMF.

What do they have to be austere about? The austerity measures include civil pay cuts, pension cuts, defence, health and education cuts- a total of 14.32bn euros over 5 years  Then there’s tax increases and selling off stakes in telecommunications and banks – a total of 14.09bn euros over 5 years. Essentially all the things that are certain to make people at best unsettled and grumpy and at worst destitute and violent. Already there is an increased rate of suicide (by 40%) and aggressive protests in the streets.

Will there be another bailout?  Well Greece were tagged for a second bailout in Oct 2011. EU leaders agreed back in July that a “selective default” was the only option. THis means that Euro nations will guarantee payouts on Greek sovereign debt, along with an agreed 50% write-off or ‘haircut’ of their existing debt.

But Prime Minister George Papandreou shocked European leaders by calling a referendum, allowing the nation to decide on the new bailout packages. Angry and shocked Euro leaders were prompted to call for a withdrawal of Greece from the Eurozone which has forced the PM to resign and form an interim, unity Government. They are expected to accept the bailout package, but talks are dragging on.

How has this affected the rest of Europe? There are a few other Eurozone countries in similar predicaments – Ireland, Italy and Portugal are all seeing the shitty effects of bloated public sectors and reckless spending.

Beyond that, if Greece doesn’t accept the bailout then what could happen is a “disorderly default” which is a nice way of saying they will exit the euro altogether, a scenario that experts claim should be viewed with fear and trepidation due to the utter financial turmoil that would ensue. I get a bit lost here I must say but there is talk of the Greek banks going arse up as they issue a new currency, which would lead to investors pulling out of other weak Euro countries and a general destabilising of an uncompetitive Euro. I think what it comes down to is  the potential for a vicious old cycle of investor wariness creating a tightening of funding conditions and a banking collapse. A financial clusterfuck really.

Meantime, the more responsible countries like France and Germany who didn’t spend up but were guilty of allowing irresponsible spending within their zone, are losing their good credit ratings (France lost their five star rating two days ago on the 13th Jan). And they are pissed. They don’t want to print off more money, devaluing their assets, to bail out idiot spendthrifts. Similarly, their taxpayers don’t want to see their money go abroad.  However, there would be more suffering – and more bad tempers – should the Greek economy and its banking system collapse.

What now then? So the temporary and special purpose facility (called the European Financial Stability Facility or EFSF) has had its 440 billion Euros approved by all 17 Eurozone member states. Talks between Euro leaders on how best to allocate these funds is still underway. As negotiations drag on, the economic sands are ever-shifting (further down the plug hole).

Whatever happens, – orderly or disorderly the repercussions of a Greek default are not pretty. Are we staring down the barrel of another global financial crisis?

I will do my very best to answer this question as things progress but my poor brain is ADDLED so don’t expect miracles.

And please enlighten me if anyone has any “financial crises for dum-dums” material, because when it comes to this stuff, I feel very dum-dum indeed.