Most of the time I just lose patience with relentless (and tricky) questions. Here is a sample (with my almost 2 year old):

Me: Because it’s just been cooked?

Me: Because we can’t eat it raw.

Me: Because it would be bad for you.

Me: Because there are nasties in uncooked foods – bugs and stuff.

Me: Here it’s cool now, put it in your cake hole and shut up.

And once (post very long drought) I told my now 5 year old son (after I’d already explained precipitation a hundred times) that rain was God’s wees. He stared hard at the rain for such a long time – as though looking for a yellow tinge – with such an alarmed expression that I felt it could have been a bit of a rash response.

Here are some A’s for the Q’s that leave parents like me floundering for intelligent response and verging on silliness that may well come back to bite your children later on in geography class (think rabbits and the Great Wall). 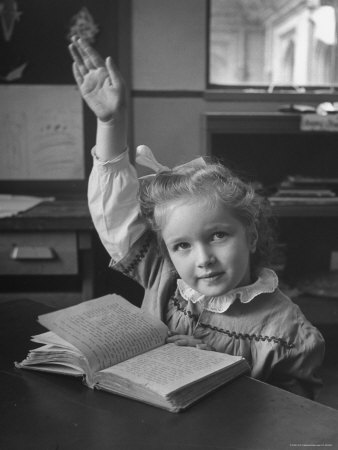 Why is the moon out in the day?

My answer: Oh silly old moon, it forgot to disappear off to bed. Maybe it’s having a party.

The proper answer: The moon is actually visible in daylight hours almost every day, except for when it is very new and like a sliver of bitten off fingernail, which is when it is too close to the sun to be seen in daylight hours (because the sun outshines it), and when it is full and exactly 180 degrees away from the sun. The best times to see the moon in the daytime are when the moon is closest to the first and last quarter, when the moon is 90 degrees away from the sun. At third quarter, when the moon will be ahead of the sun in the sky by ninety degrees, the morning sun will be in the East and the moon will be in the West. When the moon is in its last quarter and visible in the day time, if you point with one arm at the sun and with the other at the moon, your arms should form a right angle. And if you have older kids and can get slightly more geometric – before the last quarter the angle will be obtuse and after the last quarter the angle will be acute. Hey – I remember that stuff from Level 2 maths!

And while you’re at it, here are the moon’s phases (I never really knew that the waxing and waning crescents faced opposite ways):

Why does my hair grow?

My answer: Oh because the poor little hairs have been waiting and waiting inside your scalp to come out and see the world and the light of day and when they finally do they love it so much they just keep coming.

The proper answer: Well just below the surface of our skin – in our epidermis – is where the hair action happens. Our epidermis houses our hair follicles. A hair is made up of a shaft and a follicle. The follicle has a papilla containing capillaries that feed the hair, and the bulb which is the only living part of the hair. The follicle also contains sebaceous (oil) and apocrine (scent) glands. Ewww. Sebum is formed as a natural conditioner – until after puberty when it just becomes a greasy pain in the arse. A foetus has all its hair follicles by 22 weeks old – 5 million in total. This is the most we will ever have. It’s all down hill (and baldy) from there.

Inside the hair follicle, cells divide and multiply and as space fills up, older cells are pushed out. These older cells die, harden and keratinise (form a fibrous protein called keratin), and form the hair shaft.

Vellus hair is found all over the body while terminal hair develops later with hormonal influence and is found on the groin and armpits in women, and on the groin, armpits, chest, face, feet, legs and arms in men. Terminal hair is a woman’s nemesis and a beautician’s best mate then – and no wonder a bikini wax bloody hurts – it’s terminal hair, designed to be there for the term of our natural life.

Where is the wind coming from?

My answer: It’s a combination of everyone in the world’s farts. On really windy days everyone’s been eating beans and cabbage. Wind doesn’t smell because it travels such a long way and the smell is left behind.

The proper answer: Wind is all about pressure and heat (see, just like farts). Warm air rises because it is light. Cold air falls because it is heavy. Wind happens when the sun heats the cold air and it heats up and rises. The area it leaves behind becomes an area of low pressure, which means cold air floods in to fill it. All this movement of air is wind. The greater the difference in pressure the stronger the wind. In coastal areas, the ‘sea breeze’ is caused by the movement of higher pressure air from the cooler water to the (relatively) warmer land, where the air has risen leaving an area of low pressure.

My answer: Well the clouds are having a bit of an argument and are a bit cross. They are shouting at each other (boom!) – ooh that one was really angry.

The proper answer: Thunder is the sound of the vibrations sent off by lightening. Lightening discharges a huge surge of electricity, which heats the surrounding air and makes it vibrate. The heating of the air happens very quickly and causes it to expand, thereby causing rapid air movement and more vibration. The vibration sends sound bouncing off the ground and the clouds – voila, thunder! We see lightening before we hear thunder because light travels faster than sound.

Why do poos stink?

My answer: So we don’t eat it.

The proper answer: Well 3/4 of poos are made of water, so clearly there is 1 quarter that stinks to all fuck. Of this 1 quarter, a third is made up of stuff we can’t digest such as cellulose (think corn and grape skins), otherwise known as fibre, which is good for us as it helps our turds move through the intestine, perhaps by providing traction.  Another third is made up of stuff we don’t need such as fats like cholesterol, inorganic salts, live bacteria, excess proteins, dead cells from the intestine and mucus. The last third contains dead bacteria and here my friends, is mostly where the stink arises. Bacteria produce sulphur-rich organic compounds (such as indole, skatole, mercaptans and the gas hydrogen sulfide). These are the same compounds that give farts their rich aroma.

*So please don’t name your babies Indole or Skatole, they may sound exotic but are as gaggy as Melena (google it)

In response to my answer, there is a name for the practice of eating poos – cophrophagy, which is a rare culmination of autism. It’s also listed as an unusual sexual practice. Eeeek.

(and while we’re on poos) Why is Bird Poo White?

My answer: Because they get a really good laugh out of being able to see their poos all over my car. Why do you think      kookaburras laugh so much?

The proper answer: Birds don’t do wees. Instead their urine comes out the same hole they poo from (and lay eggs and have  sex)  and is excreted in the form or uric acid, which presents as a white paste. It is often combined with the darker contents of  the  intestines, which is why black and white bird poos are common.

Can I go to the moon?

My answer: Well if you work really hard at school, eat all your vegetables and be good to your mother then you might be able to get to the moon.

In reality: According to NASA, “NASA has no immediate plans to send children, teenagers or any other general citizens into space. For the near future at least, space flight remains too risky and too expensive for anyone but highly trained astronauts and payload specialists. However, one of our goals is to help industry develop new rocket systems that would make space flight much more simple and routine, so that many more people could go into orbit in the future.”

Why do we need a clock?

My answer: so I can tell you when to go to bed.

The proper answer: We need them to tell the time, and time is important because it helps us measure when things are getting older (so we know when to chuck out the cheese and why Gramps is so grumpy). Time is also an idea thought up by humans so that they can organise themselves – so that they can make sure things happen when they are supposed to happen, like I am there to meet the bus when you come home from school. Time is a system that is measured in years, months, days – and on our friend the clock – hours, minutes and seconds.

In more geeky terms and in accordance with Einstein’s Theory of General Relativity, time is the path which an object will take through a four dimensional universe when left to itself. Rightio.

Why is pink my favourite colour?

My answer: Girls like pink because we have lovely pink bits.

Another answer: It is possible that girls like pink because in the Stone Age, part of the womens’ role was to collect reddish coloured fruits, and also it was their duty to detect fever by seeing flush in their childrens’ cheeks. Hmm.

OR, Girls these days are conditioned by commercialism to like pink – walk into any girl’s toy or clothing department and what is the dominant colour?

Can I have a dog, a horse, a jumping castle, a fairy and a bag of doughnuts?