I don’t mean to be so war oriented, it’s just that a few things have happened this week that make these particular wars relevant.

Today is Vietnam Veteran’s Day and the 45th anniversary of the Battle of Long Tan and until today I had heard of it but couldn’t say exactly what it was, which seems a terrible insult to the people involved, who must carry stuff like this with them like a sack ‘o spuds, not to mention the people who were rewarded and acclaimed for their bravery in this David and Goliath battle. Here’s what happened – in a South Vietnamese  rubber plantation, near the village of Long Tan, 108 ANZACS repelled a large convoy (up to 2000 ) of Vietcong. They were outnumbered 25 to 1, 18 Australians were killed and 24 wounded, while at least 245 Vietcong were killed. It was a clear Australian victory. While I can’t rejoice in the death of anyone, I can respect the fact that the battle is cited as an example of good military co-ordination and I agree that the Vietnam Vets involved should have their gallantry honoured, as it has been done  (belatedly) today by Govenor General Quentin Bryce.

But that all begged the question, to which I had only vague answers – why were the Aussie’s there in the first place and why was there a war at all? Rightio, as concise as I can…

When? The Vietnam War had its roots back in the forties when it was a French colony, but it started officially in 1959 and ended in 1975.

What? It was a conflict based on a successful attempt to reunify North and South Vietnam under communist rule. Essentially the French and the US were shitting themselves about the spread of communism and so intervened to assist the South Vietnamese army resist takeover by big old commie Ho Chi Minh and his rebel mates.

Who? On the communist side were the people of the Democratic Republic of North Vietnam and the South Vietnamese National Front for the Liberation of South Vietnam (labelled the Viet Cong by the US to discredit them – and maybe because it’s less of a mouthful to holler in the jungle?). These communist groups were assisted by China and the Soviet Union. On the other side was the Republic of Vietnam, the Us and its allies (Australia included).

Why? Well in 1954, French forces surrendered their colony at the hand of the Viet Minh(a liberation movement formed by Prime MInister Ho Chi Minh in 1941 to seek independence from France). This lead to a (supposedly temporary) division of Vietnam into North and South. The North was made a socialist state by the Viet Minh. In the South, with military and financial assistance from the US, a non-communist state was formed, headed by Prime Minister Ngo Dinh Diem. In 1955, Diem claimed that the North was plotting to take the South by force and launched a campaign to denounce the communists. Thousands of communists and those suspected were imprisoned, tortured or executed. Finally in 1959, the northern communist party, under pressure from the embattled southern communists, authorised an armed struggle to mobilise Diem opposition and reunify Vietnam. The National Liberation Front (NLF) was born.  Infiltration of men and weapons began from the north along the Ho Chi Minh trail. Frightened by the threat of communism (during the Cold War), US President Kennedy sent in troops to aid and train the Army of the Republic of Vietnam (ARVN).

What Happened Next?  Ok I’m cutting a long story short here so please don’t think I’m trivialising things…Bombing of North Vietnam, search-and-destroy missions, Guerilla warfare (used widely by the NLF), Americanisation of South Vietnam, corruption, US anti-war demonstrations, allied forces called up (conscripted Aussie troops departed for Vietnam in 1965), more fighting, massacre at the hands of US GI (including the infamous Mai Lai tragedy in which up to 504 unarmed Vietnamese civilians wre tortured, raped and killed at the hands of arsehole US soldiers) which lead to further and louder protest and a huge anti-war movement… 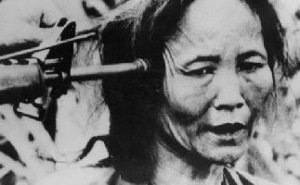 How did this Shamozzle End?  In the US and Australia, the anti-war movement gathered such momentum that politically it was ridiculous for potential leaders to support the war. The US under Nixon altered tactics to withdraw whilst intensifying bombing on Communist sanctuaries in Cambodia and stepping up training of ARVN. In 1973, a peace agreement was signed by all parties which provided for US withdrawal. The fighting between South Vietnam and the communists continued until finally the north launched an offensive in 1975 and ARVN resistance collapsed and Saigon fell at the hands of the NLF. Vietnam was reunified in 1976 and Saigon was renamed Ho-Chi Minh City.

And Vietnam Today? Well Vietnam still has a communist Government, but a market controlled (capitalist) economy, similar to China. At this time, China and Vietnam are said to be the fastest growing economies in the world.