Catch Up On…THE WAR IN IRAQ

As the last 33 Aussies are brought home from Iraq this week, it seems timely to catch up on the War in Iraq. 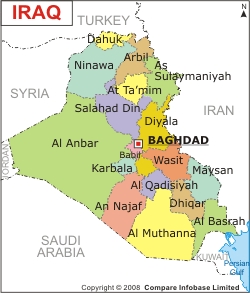 Too many borders, too much oil, too much religion (my opinion)

It all ended officially with the withdrawal of the last US combat troops in August 2010.  Aussie combat troops left in 2009. These days, around 46,000 US troops are still there, training the Iraqi army and generally trying to keep the peace. They are due to leave by DEC 31 2011, but new sparks of violence are seeing discussions on whether a US military presence should become permanent.

To date, no one can accurately report on casualties of the war in Iraq. According to one source, the total number of dead between March 2003 and Oct 2010 is estimated to be 158, 173. An estimated 120,580 of these were civilians. So where did it all start? (deep breath people)

A History of Instability

Since becoming a sovereign kingdom in 1932 (yep it goes back that far), Iraq has seen pretty constant instability in politics and foreign relations. Internally, a series of coups and counter-coups finally led to control by the Baath Party (Arab Socialist Resistance Party) which was headed in 1979 by a fuckhead called Saddam Hussein. Under Hussein, Iraq invaded the newly formed Islamic Republic of Iran in 1980. After an 8 year war of attrition (a struggle in which you hurt your opponent in lots of small ways, gradually weakening them) with no formal ending, Iraq’s promising economy (thanks to rich oil deposits) was in ruins.

Further to the Gulf War, the UN resolved to halt Iraq’s chemical, biological and nuclear weapons programme. They imposed trade sanctions to enforce this. But Hussein poo-pooed the sanctions and weapons inspections for the better part of 12 years until finally a British and US lead force (The Coalition of the Willing) declared that the evidence of Iraq’s weapons of mass destruction justified some action. They kicked Saddam out and took over Iraq after a 3 week invasion in March 2003. Hussein was captured, charged with war crimes, crimes against humanity and genocide, and hanged in December 2006.

Iraq’a 25 million people are mostly Muslim, whether they are Shi’ites, Sunnis or Kurds. Shi’ites and Sunnis are Arabs with age old religious differences while the Sunni-Kurds (Kurds) have their own language and culture and occupy their own region (Kurdistan – part of which is Iraqi Kurdistan). The Shi’ites (Shia) make up about 60% of the population, the Sunni’s 20%. The Sunnis held power while Iraq was under the control of Hussein (himself a Sunni) and during this time the Shia and Kurds suffered persecution escalating into terrible atrocities (most notable of which is the chemical attack on the town of Helabja in 1988 in which around 5,000 Kurds died). Since the Gulf War, the Kurds have maintained a level of independence under US and British protection.

Following Allied occupation and democratic elections overseen by allied forces, the Shia have sustained Government majority. The interests of the three groups still dominate daily life: The Shia dream of maintaining power (and oil), the Sunnis dream of regaining Baathist rule (and oil) and the Kurds dream of an independent Kurdistan (and probably oil). Inevitably, the Sunnis have been persecuted since the fall of Hussein and resent their diminished control. They are largely (reportedly) responsible for the insurgent attacks on occupying forces and post 2003 governments, but extremist attacks from both sides continue.

George Bush declared war on Iraq in March 2003 on the grounds that Iraq was harbouring weapons of mass destruction (WMD) and posed an ‘imminent threat’ to the world. His decision has always met with opposition, mainly because of likely casualty and inflammation to the already firey Middle East. When in 2004 a CIA report confirmed that Hussein did not have a stockpile of illicit weapons at the time of invasion, outrage and opposition billowed. Bush’s emphasis then shifted from WMD to the less concrete ‘promotion of freedom and democracy’, and then after 7/11, to the ‘Global War on Terror’. This justification bases itself on claims that Hussein and Al Qaeda were in bed together. Anti war campaigners continued their anti-Bush claims of rhetoric and false or exaggerated statements.

In 2010, Barack Obama vowed to end the war in Iraq, ‘responsibly and rapidly’ and to shift the focus to Al Qaeda in Afghanistan and Pakistan, remarking that, “the central front in the war or terror is not Iraq and it never was.” Hmm.

In March 2003, John Howard made a statement of support to the coalition forces and committed Aussie troops in “Australia’s National Interest”. This came with the added bonus of a Free Trade Agreement with the US. As a result, Australia sent 2,000 soldiers along with America’s 250,000, the UK’s 45,000, 194 from Poland and 300 from Denmark. Our blokes stayed there (in decreasing numbers) engaged in patrols, protection, rehabilitation, reconstruction and training until their withdrawal in 2009. 2 Aussie soldiers died during those 6 years, and the bill please? Over $2 billion thanks very much.

Well now that Allied combat forces have got the bloody hell out of there and the remaining US presence has seen bits of Iraq transformed (namely the heavily guarded and fortified “Green Zone’ in central Bagdhad – a bubble of New Iraq), relations between the fighting groups are tenuous at best. Government is fragile and rife with rumours of corruption. The 2010 elections had no result, no majority and resulted in an escalation in violence from extremists on all sides – brilliant.  Eventually a new Government was formed to represent all major factions, with the previous (Shi’ite) Prime Minister Nouri al-Maliki being reinstated and (Kurdish) President Jala Talabani. Key ministries are still unfulfilled because no one can decide who should do what.

Peace agreements and peaceful enterprise – including a joint Iraq-Iran-Syrian agreement to build an enormous gas pipeline  – seem to be stymied at every turn by inherent division and age old nemeses. Iraq is being bossed around by Iran in Middle East relations, while an Iraqi branch of Al Qaeda (AQI) have claimed responsibility for a number of attacks on Iraqi forces and infrastructure as they aim to create a pure Islamic state. And just this week, reports are coming through of a large Iranian attack on Kurdish camps in Iraq, with some claims it is an Iranian invasion. Meantime, Sunni leaders are pissed of because a Shi’ite has been appointed minister of defence and 89 people die in various insurgent attacks this Monday just gone. Every day there is new evidence of festering wounds that keep the Government beating it’s head against a brick wall.

The Latest  As of 15/10/2011, most of the US’s remaining 550  soldiers have left, and the US flag is about to be lowered to mark the official end of the war – 9 years since it began. Security is back in the hands of Iraqi authorities and President Obama, who has labelled this ‘a dumb war’, has said that the US has left behind a “sovereign, stable and self reliant Iraq” and that the ‘dying and bleeding’ was not in vain, but has lead to success.

15,000 US personnel will remain at the US embassy in Baghdad, by far the world’s largest. Perhaps a sign of the instability they leave behind? Will terrorism rise again? Will bloodletting again become a way of life? Is Iraq’s political structure strong enough to defend its borders? Will sectarian conflict that resulted in the loss of tens of thousands of Iraqi lives come to prevail again? All we can do is wait and see.